Is COQ10 (Coenzyme Q10) available in BAC?
The first-of-a-kind government study released Tuesday shows the issue is far from settled.

These days there is so much talk and controversy about vitamin D, I am glad to address this recent question. The full question was:

“I was talking to a nutritionist, and he said that one of the big nutritional issues in people is vitamin D deficiency due to lack of sun exposure. To supplement, he said, requires huge doses to make up for the lack of sunshine. What is the vitamin D content in BAC?”

Before answering your question, I want to expand on the current “craziness” about vitamin D. Vitamin D has become a “star” in the health industry as a result of recent and not so recent rumors, propaganda and “just” marketing intended to increase sales of this vitamin.

The controversy with supplementing vitamin D

“At no time, ever, from any source, could the human or animal body have gotten the massive doses of vitamin D being used today in research, in medicine and as additives in feed in animal husbandry.”
~ Krispin Sullivan, CN 2003

Many companies are selling vitamin D in doses from 400 IU to as much as 5,000 IU. Supplement companies periodically send newsletters continuing to report the benefits of vitamin D and harmful effects of having too little vitamin D. One might assume buying and taking one of these supplements will make sure you are sufficient in vitamin D.

But following much research and published (old and new) papers on vitamin D the ‘facts’ remain the same. Each person absorbs and/or produces vitamin D differently. One person may simply expose arms and legs several times a week and have adequate levels of D, others may take a supplement of 4,000 IU daily and not see an increase of their vitamin D at all. While still others, by simply increasing their calcium intake, or changing their diets, will see their level of D rise without taking supplemental D.

Getting enough of the so-called sunshine vitamin (the skin makes it from ultraviolet rays) is vital for strong bones and other metabolisms. But vitamin D has made headlines in recent years because of research saying it may be a powerful cancer fighter, sparking a push for people to get more than currently recommended amounts, either through diet or sun exposure. 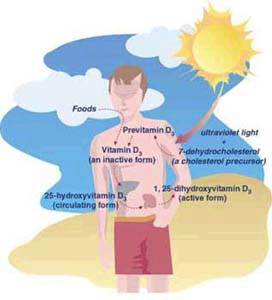 Experts are cautious because other vitamins and nutrient supplements once widely thought to prevent cancer did not pan out when put to rigorous testing. With vitamin D, there is now a lot of research showing the potential dangers of vitamin D supplementation.

National Cancer Institute researchers analyzed vitamin D levels measured in almost 17,000 people as part of a national study that tracked their health. About a decade after enrolling, 536 of those people had died of cancer.

Whether people had low or high vitamin D levels played no role in their risk of dying from cancer in general, they reported in the Journal of the National Cancer Institute.

Is COQ10 (Coenzyme Q10) available in BAC?
The first-of-a-kind government study released Tuesday shows the issue is far from settled.