BAC for Hypoglycemia and Diabetes
BAC for Cleansing and Detoxification

“Unless man duplicates a blade of grass, nature can laugh at his so-called scientific knowledge. Remedies from chemicals will never stand in favor compared with the products of nature, the living cell of the plant, the final result of the rays of the sun, the mother of all life.”
– Thomas A. Edison

Good vision and eye health is a concern for both young and old. Blurred vision, eye strain, eye fatigue and irritations are just a few of the common ailments we experience. More serious conditions include cataracts and age-related macular degeneration (ARMD), which develop due to degenerative cellular health and accumulated free radical damage. Studies have shown that antioxidants play an important role in maintaining ocular health and preventing serious conditions such as cataracts and ARMD.

ARMD is one of the leading causes of irreversible vision loss around the world. During our lifetimes, normal metabolic processes and the absorption of UV light generates free radicals and oxidants, which cause damage to photoreceptors in the eye. This leads to impaired function and, overtime, to the degeneration of the macula, a central part of the retina. Antioxidants can eliminate these free radicals and oxidants, which will help to prevent further cellular damage to the macula.

Antioxidant research is one of the pillars in the study of life extension and general health. Some antioxidants, such as R(+)-lipoic acid and full-spectrum Vitamin C, have merited greater scientific interest than others. These antioxidants form an elite subset of antioxidants due to their unique properties, mechanisms of action, central importance and/or exceptional potency.

The antioxidants in BAC

So why do the antioxidants in Bio-Algae Concentrates merit admittance into this exclusive subset? There are only three carotenoids (a type of antioxidant) that are able to transverse the blood brain barrier and the blood retinal barrier, thereby allowing them to alleviate oxidative stress in the brain, eyes and central nervous system. These three carotenoids are lutein, zeaxanthin and astaxanthin. Bio-Algae Concentrates contains all three in addition to many more known beneficial carotenoids and even some that have not yet been identified.

Studies done on lutein and zeaxanthin carotenoids show that they help reduce the risk of age-related macular disease in the elderly. Astaxanthin has been shown to reduce the risk of ARMD as well as protect the ciliary body, the part of the eye that controls the lens, from harmful oxidative stress.

Astaxanthin is found in abundance in marine environments, particularly among algae and plankton. The algae Heomatoccocus pluvialis, as contained in BAC, contains the highest level of astaxanthin.

Astaxanthin has a unique molecular structure: its polar end groups have the distinct ability to attach themselves to both sides of the lipid bilayer that make up the cell membrane. 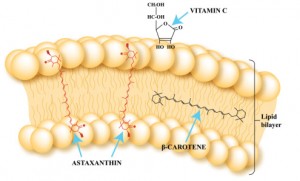 From this position, astaxanthin inhibits oxidation of the cell membrane, thereby protecting the rest of the cell from potentially damaging oxidation. Astaxanthin can also eliminate free radicals by adding them to its structure rather than sacrificing an atom or electron, meaning that unlike most antioxidants, astaxanthin is far less likely to become a mild free radical right after eliminating one. This also allows astaxanthin to be more biologically active, enabling it to trap and eliminate more free radicals – and of a greater variety – than most other antioxidants.

Read more about astaxanthin in: “BAC Contains High Levels of Astaxanthin, the Star of the Carotenoids”

In another double-blind randomized placebo controlled study, 20-year-old male hand-ball players received an oral dose of 6mg of astaxanthin per day during a period of 4 weeks. Improvements were noticed in their depth perception and critical flicker threshold. Based on this preliminary study it is shown that astaxanthin may be effective for improving vision in sports.

To conclude, let me remind you that BAC is much more then just antioxidants. I personally have more faith in “BAC awakens the genius within” than in its antioxidative powers. I believe that when our cells recover from exhaustion, they will perform their metabolic activity better and this will heal the body.

My vision is improving very much

“I have found for myself that I am getting so much more done now than ever before… forget those help-yourself manuals! Just get yourself on the right track and watch out! My vision is improving very much and I just realized that my astigmatism is not so noticeable, wow.”

“Dear Roland, I am now on my fourth bottle of the Bio-Algae and still taking nine capsules a day, as you advised.

The eye doctor checked the pressure for the glaucoma yesterday. I was most curious to see if there would be any difference since taking the BAC. The pressure in my right eye (which they have been unable to bring down for years) has dropped from 16 to 11. The left eye is even a bit lower!!

Even more strange: I noticed that the vision in my left eye had improved…..I have a few blind spots from the glaucoma, and when I read the chart I find that every third letter in a line is a total blur. This time I was able to read many more letters.

I am really happy about it and now feel justified in spending that much every month! Thank you again so much for all your help and advice.
Sincerely”

“Thought you would like to know that I have had a pretty favorable eye check up. Especially compared to declining eyesight. This time only a little of the retina damage was seen by the optometrist. Very good news for me. Was also thinking about my cat. He seems to have less breathing problems. He has been taking two capsules to my twelve. Hope that this reaches you in the greatest wealth, good health!”

“After observing the success my wife was having using BAC for her fibromyalgia I decided to try BAC for my energy and general declining health. I also suffered from Glaucoma experiencing intense pressure and pain. Now after two months of using BAC, my Glaucoma pressure has declined radically, my doctor wants to talk with you folks about BAC for his other patients. I feel better overall with my health and have lots more energy like my wife”

Kupcinskas L, et al. Efficacy of the antioxidant astaxanthin in the treatment of functional dyspepsia in patients with or without Helicobacter pylori gastritis: a prospective, randomized, double-blind, and placebo-controlled study. Eur. J. Gastroint and Hepat. (In Press).

BAC for Hypoglycemia and Diabetes
BAC for Cleansing and Detoxification