Because of its high chlorophyll content (higher then most foods), BAC is useful for treating health conditions that could benefit from the energizing, purification, renewal, and anti-inflammatory properties of chlorophyll. For example, control of energy-draining viruses and fungi such as candida-overgrowth, Epstein-Barr virus, chronic fatigue immune deficiency syndrome (CFIDS) and AIDS, is enhanced by the immune-enhancing and antiviral qualities of chlorophyll.

Many important natural substances are chelates. Chelates are composed of a central metal ion bonded to a large organic molecule comprised of carbon, hydrogen and other elements such as oxygen and nitrogen. One such chelate is chlorophyll: the green pigment of algae and plants. In chlorophyll the central ion is magnesium and the large organic molecule is a porphyrin. The porphyrin contains four nitrogen atoms that form bonds to magnesium in a square planar arrangement.

BAC’s Chlorophyll for the Metabolism of Light / Energy

Energy is a vital force that we need for life. By liberating the sun’s forces from carbohydrates and lipids, we can get energy from light. 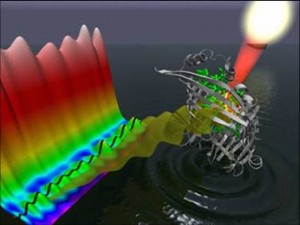 Through photosynthesis certain microalgae like cyanobacteria are able to transfer sunlight energy to molecular reaction centers for conversion into chemical energy with near 100% efficiency.

Energy from light is received somewhat directly as sunlight, but it is received in much greater amounts from our food. The chemical energy stored by photosynthesis in carbohydrates drives biochemical reactions in nearly all living organisms. Releasing the forces of light from food requires a balanced disassembly of starches, sugars, and fats, which are the bearers of light.

Chlorophyll is the shepherd of light energy. In the central atom of the chlorophyll molecule is magnesium, which is where the sun’s light is gathered for releasing the sugars, starches, and fats from which we will eventually get our energy. Magnesium is omnipresent in the Krebs (citric acid) cycle: the catabolic steps in which we disassemble sugars and fats.

Chlorophyll is sometimes called “green blood” because of its similarity to the hemoglobin molecule found in human blood cells. In fact, both have an almost identical molecular structure called pyrrole rings, and both substances are chemically known as porphyrin pigments.

The difference between them is that chlorophyll contains a magnesium ion at its core, while hemoglobin contains an iron molecule. Magnesium imparts a green color to the chlorophyll molecule and is involved in synthesis of other materials, while iron gives hemoglobin a red coloration and changes the function of the porphyrin molecule to respiration and breakdown of materials. But perhaps the most interesting connection between green foods and blood is the similarity in the structures of the two colored pigments heme and chlorophyll.

There are many reasons why cereal grass and other dark green plants can be considered “blood-building” foods. The vitamins and minerals in cereal grass are essential to the synthesis and function of the components of healthy blood.

The biological relationship between these two molecules, though studied for over 60 years, is still not completely clear. It does appear, however, that small amounts of the digestive products of chlorophyll may stimulate the synthesis of either heme or globin or both in animals and humans.

What’s so good about the chlorophyll in BAC?

Chlorophyll releases ions when struck by the energy of sunlight. These free ions proceed to stimulate the biochemical reactions that form proteins, vitamins and sugars.

It is believed that if chlorophyll is ingested with sufficient iron, its magnesium can be displaced to yield a hemoglobin molecule. Experiments in Japan and Russia have demonstrated that algae have a marked positive effect on leukemia and anemia, possibly due to the conversion of chlorophyll into hemoglobin. Of course, the high nutrient density of spirulina alone, especially its blood-building vitamin B12, folic acid and amino acids, is also useful in treating cases of anemia.

Chlorophyll has other positive benefits for the body. It increases peristaltic action and thus relieves constipation and also normalizes the secretion of digestive acids. It also soothes inflammation and reduces excess pepsin secretion associated with gastric ulcers.

During World War II, the drying action of chlorophyll and its antiseptic qualities made it a common first-aid measure to prevent festering of wounds. In addition, chlorophyll soothes swelling and promotes granulation, the process that regenerates new tissue over injuries.

Chlorophyll appears to promote regeneration of damaged liver cells, and also increases circulation to all the organs by dilating blood vessels. In the heart, chlorophyll aids in transmission of nerve impulses that control contraction. The heart rate is slowed, yet each contraction is increased in power, thus improving the overall efficiency of cardiac work.

Another interesting point is that chlorophyll is known to help remove heavy metals from your body that have accumulated due to the ingestion of contaminated food products. Certain types of seafood are especially known to contain dangerous levels of heavy metals like mercury, but these contaminants are also found in animal products and even non-organic crops. If you have been eating refined foods, you undoubtedly have mercury, cadmium, arsenic, lead, PCBs and other contaminants in your body. The chlorophyll in BAC actually helps remove those heavy metals from your body, which can have seemingly miraculous benefits to your health.

Another common source for contaminants is mercury fillings used by dentists. They call them “silver fillings,” since they don’t want to openly admit they are still putting mercury — one of the most potent nerve toxins on the planet — into the mouths of patients. These mercury fillings emit a steady stream of mercury vapor that gets absorbed into your body. Frequently, small bits of these mercury fillings crack, break off, and are swallowed with your food. In this way, nearly all dental patients in America and other “civilized” countries are subjected to routine mercury poisoning at the hands of their dentists.

BAC can help protect you by escorting the mercury out of your body before it can do damage. If you take BAC before and after receiving dental work, you will help protect yourself from the toxic effects of mercury fillings. This is especially important if you decide to have your mercury fillings removed, as more and more people are doing. The very process of drilling them out results in a tidal wave of mercury exposure in your body. Consuming BAC offers considerable protection against the mercury bits you inevitably swallow during this procedure.

For example, many people undergo full-scale mercury filling removal, which requires several sessions in the chair. For this type of procedure we recommend using more BAC before and after each session. As a result, you will be much more protected from the ill effects of mercury removal.

Chlorophyll does much more than protect you from mercury, however. It is also a general detoxifier that supports liver function so that your body can do a better job of eliminating toxins from your system.