Astaxanthin is a pigment of the carotenoid complex found in the microalgae Haematococcus pluvialis present in Bio-Algae Concentrates. It is an oxygenated pigment called a xanthophyll. Its unique molecular structure gives it a superior antioxidant capacity.

I will describe this extraordinary red pigment to illustrate the power of Bio-Algae Concentrates.

Astaxanthin is most effective against Lipoperoxidation in membrane models

Those benefits described so far warrant astaxanthin’s nick name “the King of Carotenoids”, but there is more, read on.

There is a substantial body of literature including in vitro studies, preclinical studies and several human clinical trials that show that astaxanthin, with its unique molecular structure and resulting potent antioxidant activity, may be an effective therapeutic modality for a variety of conditions, including cardiovascular, immune, anti-inflammatory, and neurodegenerative disorders.

Independent of the Soviet studies, there have been numerous preclinical in vivo and in vitro studies and several human clinical trials to evaluate the efficacy of astaxanthin.

Astaxanthin has been shown to inhibit lipid peroxidation at the cell level, thus protecting the cell membrane and the mitochondrial membrane within the cell. It is able to cross the blood-brain barrier which makes it available to the eye, brain and central nervous system to alleviate oxidative stress that contributes to ocular and neurodegenerative diseases such as glaucoma and Alzheimer’s. Astaxanthin has also been shown to provide significantly more antioxidant capacity than other carotenoids and antioxidants, such as beta-carotene and Vitamin E.

Astaxanthin entraps free radicals by adding them to its long, double-bonded chain.

Rather than donating an electron, astaxanthin stabilizes the cell membrane like a bridge, in that its polar end groups span the cell membrane thus increasing its rigidity and mechanical strength. This allows astaxanthin to neutralize singlet and triplet oxygen generated by UVA and UVB radiation and other sources, to bind to lipoprotein, an efficient transport vehicle, making it more bioavailable, and to increase immune system function, including heightened production of antibody-secreting cells and Interleukin 2 and suppression of Interferon-gamma. 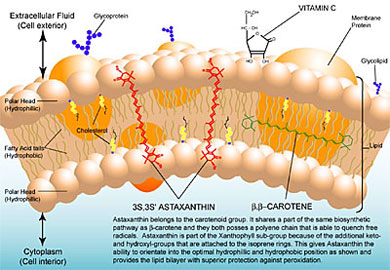 Newer studies have shown that astaxanthin inhibits reactive oxygen species that cause inflammation, enhances the antioxidant actions of Vitamin E and Vitamin C, and encourages the release of Vitamin A from the liver when needed.

Following ingestion, astaxanthin is absorbed by the duodenal mucosa and transported to the liver where it binds with a lipoprotein for transport through the body and to the cell site. Because it is oxygenated, a xanthophyll has greater antioxidant capacity than many other carotenoids.

Within the xanthophylls, the astaxanthin molecule contains the longest conjugated, double-bond polyene chain along with both hydroxy and carbonyl groups at each end. This configuration supports the greatest antioxidant capacity, peroxyl radical chain-breaking abilities, the incorporation of free radicals into its polyene chain thereby more effectively trapping them, and the enhancement of Vitamin C as an antioxidant.

While other carotenoids and antioxidants may perform one or two of these functions, astaxanthin does them all and, in most cases, does them better. In addition to entrapping free radicals, astaxanthin also de-charges singlet and triplet oxygen and inhibits reactive oxygen, giving its anti-inflammatory properties.

With its unique chemical structure as a carotenoid with superior positioning and orientation in the cell membrane, astaxanthin has been shown to be:

ASTAXANTHIN HAS BEEN SHOWN TO:

* Confirmed in human clinical study
** Confirmed in preclinical studies
Preclinical studies demonstrate that astaxanthin is safe, with no known side effects: On August 11, 1987, Roche Vitamins and Fine Chemicals (a division of Hoffman- La Roche, Inc.) submitted a petition to FDA concerning approval of synthetic astaxanthin as a feed additive for pigmentation in Salmonid fish. These studies were done to evaluate toxicity, mutagenicity, teratology and embryotoxicity, reproductive performance and tolerance.